Impressions of Turkey in the eyes of Vietnamese girls

Ninh Linh was surprised when the street vendors were all men, dogs and cats were lying everywhere on the street...

Ninh Linh, born in 1995, Hai Duong, chose Turkey as the first place to go abroad after the epidemic. She went on a tour for 32 million VND, one of the first two tours of Vietnamese people to Turkey after the epidemic. With this price, Linh considers it "cheap and must take advantage of opportunities". The trip took place at the end of April, lasted a week, enough for Linh to be impressed with many things in Turkey. 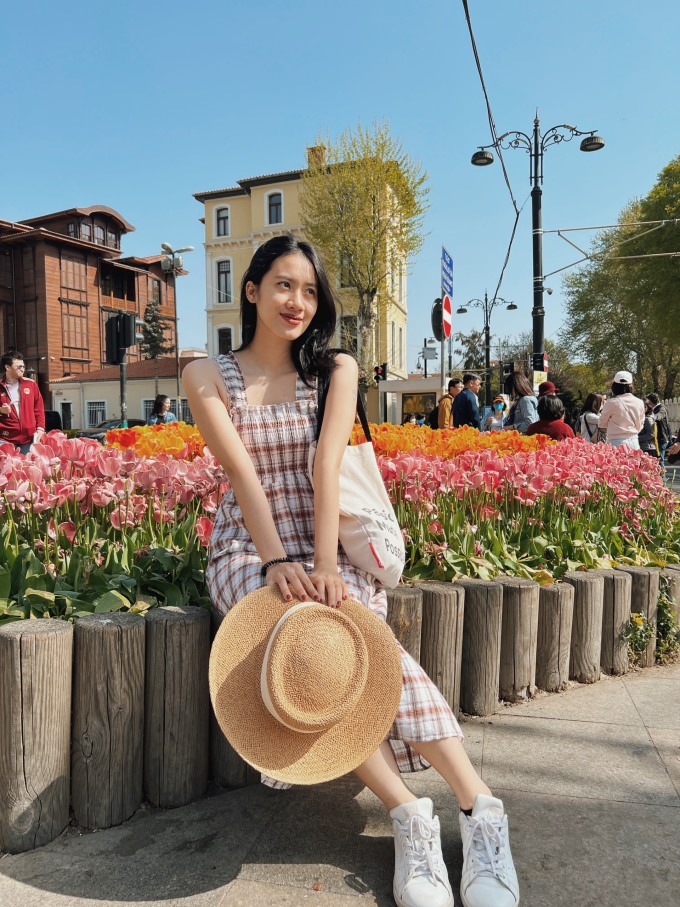 Ninh Linh, one of the first Vietnamese tourists to Turkey through a tour after the epidemic,

Linh's first impression of Turkey is that the salespeople always refer to any Asian as "China?" (Chinese right?). Her memorable memory is being offered a tray of seeds by a vendor after Linh introduced herself as Vietnamese. Afraid of being dragged, Linh refused, but the boy still followed and invited him continuously. Feeling a little scared, Linh agreed to try a piece and praised it. The shopkeeper smiled and thanked him, then immediately returned to the store and said "I love Vietnam". At that time, she was relieved because it turned out that the guy was kind, but Linh still noted that tourists should always be cautious and suspicious to avoid any incidents on the way.

Linh was surprised when Turkey planted many oranges, every tree was full of fruit and berry. By the time Linh arrived, every restaurant would display raw oranges in front of the door, making the street more lively when covered with a beautiful orange color. "The price is very cheap, in Vietnamese currency a cup of 6 oranges costs 60,000 VND, sweet without sugar," Linh commented. 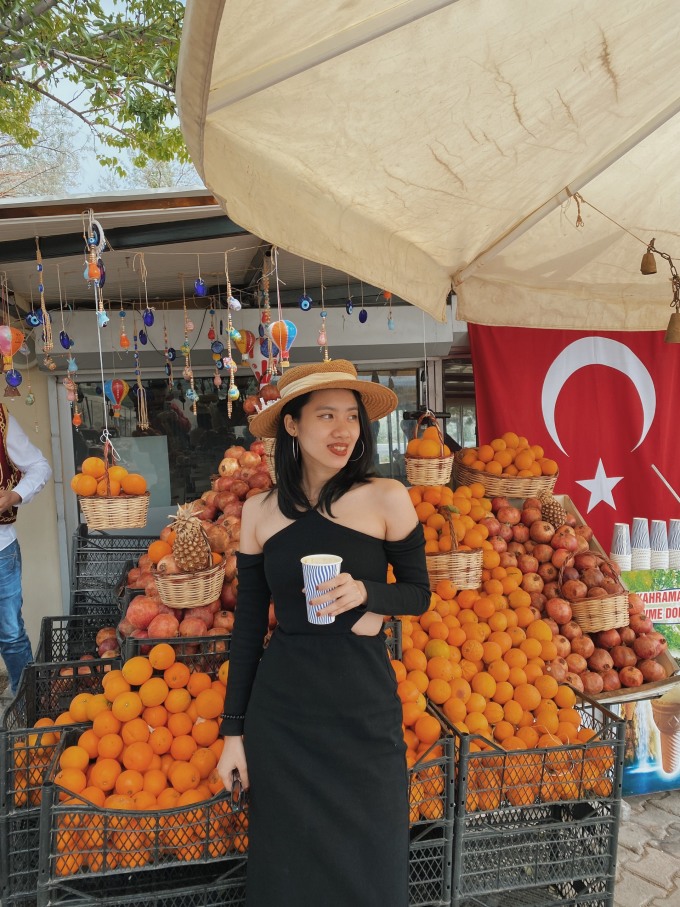 What is interesting compared to Vietnam is that orange sellers or any street vendors are men, because they think their selling skills are more skillful than women's. These men all wear flat shirts, even very polite suits, glossy glue, neatly trimmed beards. They have many "tricks" to entice, such as lending hats, borrowing clothes, trying a variety of sweets and cakes... but still making customers happy.

Talking about the art of selling, Linh also recounted an interesting shopping experience here. When visiting a leather factory, Linh thought of simply visiting the factory and seeing the products. Unexpectedly, when she arrived, she and the whole group were greeted with a specialty tea of ​​Turkey. The first room to enter is a catwalk, which is small but can accommodate about 40 people. After the music and lights appear, viewers have the feeling of being caught up in a famous fashion show like on TV. Tourists were invited by models to hold hands on the catwalk to try on clothes, go to the catwalk and be praised. The show ends, visitors enter a door, inside is a large room with many different clothing designs. "Make sure, every visitor is mesmerized by this multi-sensory sales tactic," Linh said.

Coming to Turkey, Linh was surprised that churches were everywhere. Knowing that the country is famous for its beautiful mosques, Linh was still surprised at the density. "About a kilometer, you will see a church. Even in shabby industrial areas, the church is also elaborately built on the principle of ascending floors with a system of domes and semi-domes, surrounded by precious stones. The tower is shaped like a pencil," Linh described. 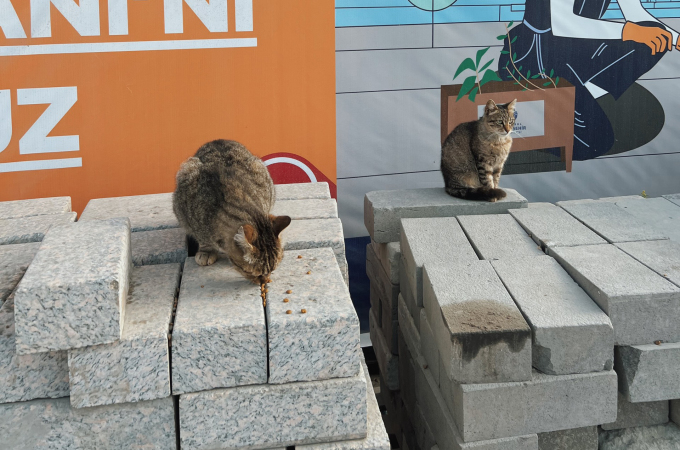 Cats are all over the streets, people bring seeds to eat.

In addition, a lovely point is that cats and dogs are everywhere, lying warm all over the streets. People always have seeds and bread available for them to eat, but the streets are still clean. Turkish people love to sit on the sidewalk when eating at a restaurant because they want to warm up in the sun and watch the street.

Regarding cuisine, Linh's impression is that the people here distinguish very clearly, which dishes are very salty, sweet and very sweet. "I used to eat a very light dish, like a salad, which is mixed with vegetables, squeezed a little lemon, no more spices," Linh described. An interesting thing is that all sauces in Turkey are sour, she was surprised when she ate breaded squid with sauce from yogurt.

Turkish barbecue is delicious because it is the original meat that is salted and then grilled. They don't eat pork, so the meals are only beef, sheep, and chicken. Boat-shaped pizza is an impressive dish, with a thin base, fragrant with grilled meat, seasoned seasoning just right. Linh also has the experience of eating poppy flower yogurt, which is quite special.

Traveling around Turkey on tour, Linh was most impressed with Pamukkale, where there is a vast grassland and above the hill is the ancient city of Hierapolis or "cotton castle" like a fairy scene. 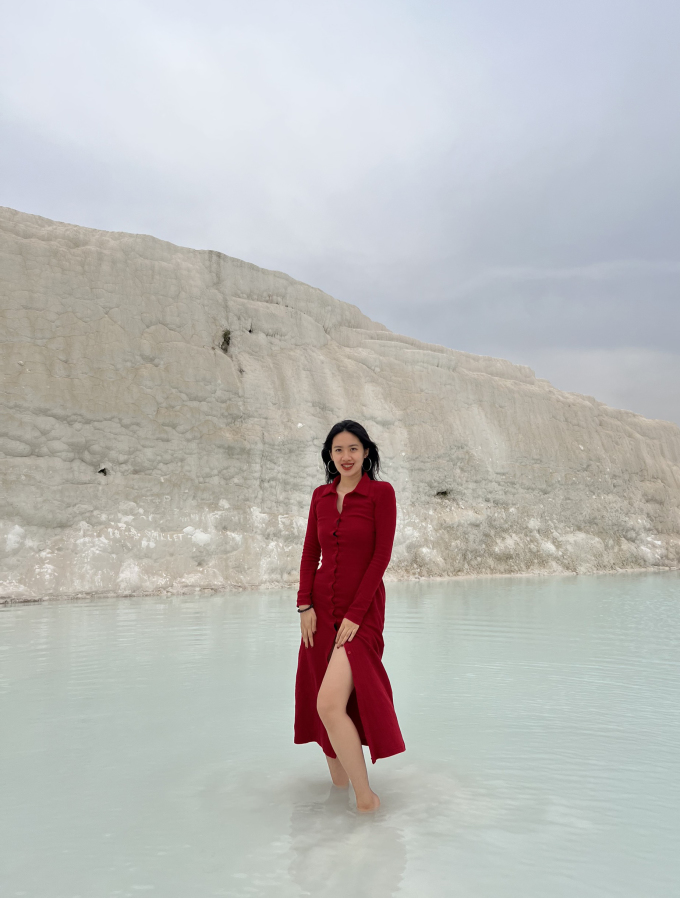 Linh checked-in at Bong Castle, which is actually the place where there are natural terraced mineral pools.

She also went to Cappadocia, fulfilling her dream of flying with hundreds of hot air balloons at the same time. The weather is colder than in other parts of Turkey because of the mountains. Linh also noted that visitors only have two options: either fly the hot air balloon, or take a photo with the hot air balloon, can't choose both because the balloons will both rise and fall together.

After the trip, Ninh Linh still regretted that she did not have much time to stay in Cappadocia or Istanbul to see more of the street. Next time if she has the opportunity to come back, she will choose to go on her own to be more proactive in her journey, try "serious" Turkish doner kebab bread.